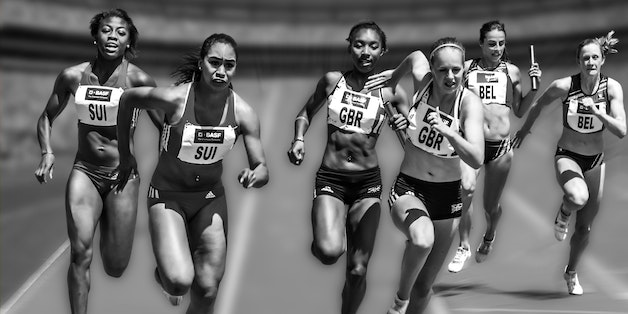 Engaging in competition is practically a right of passage for anyone in the human race. It dates back as far as caveperson days, and it occurs in the consumer journey more often than one might think.

Competition is a result of humans’ innate desire to survive and gain rewards for their efforts. In marketing, the psychological benefits of competition appear in subtle ways. And there are a few ways that competition itself can come to life for consumers. Below are a few examples.

Getting the best bargain

Consumers love a good deal. So much so, that they are willing to compete for one.

You may recognize these competitions when you see them, but not always readily identify them as such. Instead, they might look like a standard offer telling consumers that an item is on sale while supplies last. In cases like these, customers compete against themselves, the countdown timer and other customers who want the same item. And it’s all in good fun.

Highly promoted examples of this include events like Black Friday and Amazon Prime Day, flash sales, and sitewide discounts.

If you give a customer a goal to aspire to, you’re speaking directly to some of their most primal psychological needs — including competition.

Consumers are goal-oriented. It’s one of the reasons call-to-actions (CTAs) are staple tools in marketing. Not only do they provide consumers with clear directions, but they also allow consumers to look ahead at the possible benefits they’ll gain from following through with your request.

When consumers are told to “Act Fast” or “Enter a contest for a chance to win,”, they’re given the opportunity to reach their newfound goal of earning a reward. Other CTAs may include other directives like telling consumers to click a link or go to your website for more information.

Racing against a clock

You may have heard the phrase “race against the clock” a time or two. Consumers also aren’t strangers to the concept; they regularly compete against time to catch a deal, item or service before time expires.

This sort of competition can play on a number of psychological principles: the fear of missing out, anticipation, scarcity and more. Consumers may get FOMO at losing out on a product, or experience anticipation as they imagine “winning” the competition. When brain science is leveraged in this way, consumers are able to exercise more of their psychological strengths.

Competing for a premium incentive

When rewards is valued, the desire to compete grows. After all, the existence of a rewarding outcome is one of the keys to creating a solid consumer-centered incentive.

Rewards, and the competitions consumers enter to win them, offer a platform for consumers to display their strengths and feel good about themselves. There’s a certain amount of emotional investment that goes into competing for a valuable incentive and when consumers are going after something they view as important, there’s an added benefit of adrenaline and personal belonging that comes from engaging in a fun interactive experience.

When paired with competition, premium incentives might look like exclusive access to a new product before others, a larger discount for loyal customers or tiered rewards that change in value.

Competition and marketing have a long-standing, and oftentimes, discreet relationship. The psychological impact and benefits for consumers are one of the many reasons brands rely on this tactic time and time again.