A Quick Survey: The case for loyalty programs

A Quick Survey: The effectiveness of social media

A Quick Survey: How consumers feel about your mobile app

A Quick Survey: Email is effective

A Quick Survey: Consumers are ready to engage with brands in 2020

Spending habits around 2019’s Black Friday and Cyber Monday blew previous years’ out of the water.

Consumers spent $9.4 billion on Cyber Monday, according to Adobe Analytics. That’s about a 19% increase from 2018. The same data shows that online sales for Black Friday reached $7.2 billion.

It goes without saying, brands were successful in their marketing efforts to consumers.

We couldn’t help but notice a few trends that landed in our inboxes. So here are four tactics based on consumer psychology around 2019’s Black Friday and Cyber Monday.

When an offer is marketed as exclusive, it's believed to be scarce. The perception of scarcity has a powerful effect on a person’s behavior.

Consumer Psychologist Dante Pirouz explained that when consumers perceive something as rare, their brain becomes hyper focused on it. That’s because heightened cognitive processing kicks in, which often elicits anxiety when forecasting the future absence of said rarity.

Additionally, offers of exclusivity can make a consumer feel special. Sales can be driven by giving specific customers access to a deal that the general public doesn't have quite yet.

Take this email below. It was sent on Wednesday, Nov. 27, the day before Thanksgiving, to every person subscribed to the brand's mailing list.

Subject line: SALE STARTS TOMORROW. FOR EVERYONE ELSE.

A number of brands extended deals passed Cyber Monday as a quick, last-minute surprise to consumers.

By doing this, companies are able to humanize their brand. This act of extending a deadline can make a consumer feel as though they've received a favor, which could make a person want to buy from that brand more.

Dr. Robert Cialdini refers to this as 'reciprocity' in his book "Influence: The Psychology of Persuasion." It's the belief that if someone did something for you, you'd feel compelled to do something for them. 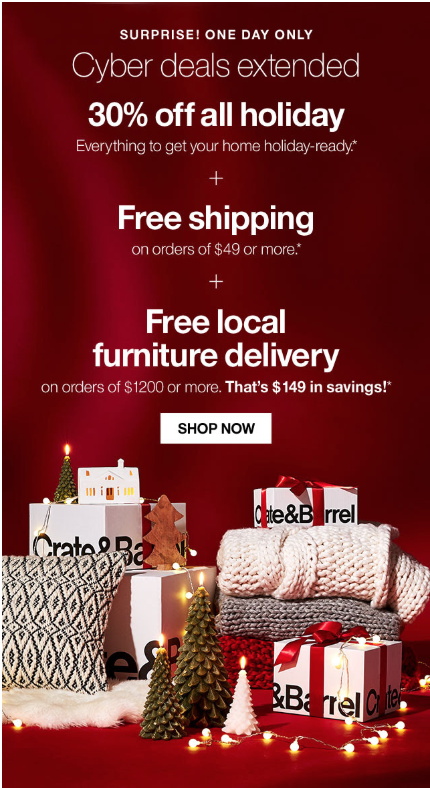 While some brands offered additional incentives to their discounts, like free shipping and local furniture delivery, others attempted to use rhetoric to create a sense of urgency around their offers.

Subject line: WE'VE (OVER) EXTENDED OURSELVES 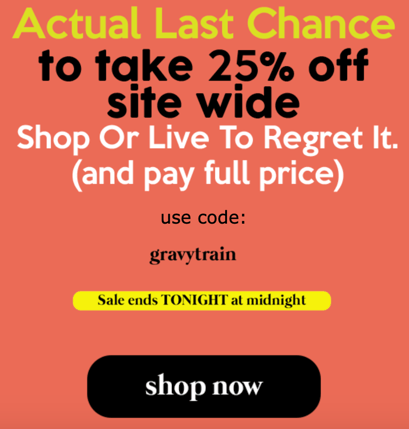 Both of these advertisements listed an expiration date in their marketing emails. When a time constraint is placed, a consumer is made to feel like they need to act fast.

When words like "limited time offer" and "take advantage of this before today is over" are used — a fear of missing out on a deal is created. This makes a consumer want to act urgently before bypassing the ability to save on a purchase entirely.

The email below does this in a few different ways. The first signal is the phrase "literal final hours" in the subject line. Second, are the words "LAST CALL!" at the bottom of the image. Coming in at third is the statement: "Don't let items disappear from your cart. Finders keepers isn't in play, unfortunately."

Marketers went right for consumers' emotions this year. Not only were they able to humanize their brands, but they also were able to make consumers feel good about their purchases and, in turn, themselves.

Companies and organizations used Giving Tuesday as an opportunity to incite positivity. Some did this by either matching donations or incentivizing customers in other ways.

Regardless of how marketers went about tying their brands to perceived altruistic intentions, they were able to create narratives that made consumers feel things.

An article in Psychology Today states: “Emotional end-benefits impact the consumer’s concept of self and play an important role in motivation."

It goes on to say that products have the "power to change the consumer’s perception of who they are by altering 'the self'. They deliver desired emotional end-benefits, including self-esteem and hedonic feelings, such as satisfaction and power.”

Notably, this concept is not limited to products. It can be applied to any narrative a consumer wants to believe about oneself.

So if a person donated to an organization or bought a product on Giving Tuesday, they probably felt good about supporting a cause and, in turn, ended up feeling positively about themselves.

As more people shopped from their cell phones around Black Friday and Cyber Monday, messages using consumer psychology had a profitable outcome. In fact, 73% of global digital traffic came from mobile devices, according to Salesforce. This was a 66% increase from 2018.

We expect these trends and others based in consumer psychology to continue as technology becomes even more integrated in consumers' lives.

A Quick Survey: How consumers feel about your mobile app

A Quick Survey: Email is effective

A Quick Survey: Consumers are ready to engage with brands in 2020

and get the latest product enhancements.